I can tell you exactly where I was, and what I was doing when someone first told me to “bloom where you’re planted.” I was 23 years old, and sitting on some concrete steps leading down into the Myriad Botanical Gardens of Oklahoma City – I went to college and grad school in Oklahoma, before we moved to NYC.

I was on the phone with a guy I was interested in – the man who would be my first gay relationship after coming out – and he was talking to me as he walked home from a piano lesson in the small town in which he grew up, telling me what he saw and with whom he met, on the way. While he talked, I watched a small bird – most likely a wren – jump around on the steps in front of me. I lamented to him that my life in Oklahoma City couldn’t possibly be as interesting as his was, in his small town.

“I don’t believe that,” he said. “No sense being down about it. You are where you are, so make the most of it. I’m sure there are plenty of wonderful or interesting things happening. Bloom where you’re planted!”

I’d never heard this phrase before – but hearing it was one of the first of many events that would completely change my life and my outlook on the world around me.

What does it mean to bloom where you’re planted?

While the actual origin of the phrase is shrouded in mystery (rather, it’s just not clear where it truly came from), most people seem to understand it to be a figurative phrase. We’re not literally planting people (ever see that horror classic Motel Hell? They planted people. This is not advisable.)

We’re “planted,” metaphorically speaking, where we live – where we’re stationed, where our job is, or even where we are physically or mentally. If we’re to bloom where we’re planted, we have to dig deep with our roots, find what there is to find wherever we are, and use it to bring us into our best selves.

A lotus blooms at the Bethesda Fountain in Central Park

The lotus is a brilliant representation of this metaphor, because it literally germinates and grows in the mud into one of the most beautiful and highly symbolic flowers in the world! We can bloom wherever we’re planted… even if it’s in the mud!

How I bloom where I’m planted:

My husband and I love to have miniature “stay-cations” in the city on days we have off together. We live in New York City, for crying out loud! There’s always so much to see and do, even without money!

This past weekend was Thanksgiving Day weekend, including Black Friday. Instead of bowing to the gods of consumerism (or taking advantage of amazing deals – however you want to look at it), we decided to take a walk. 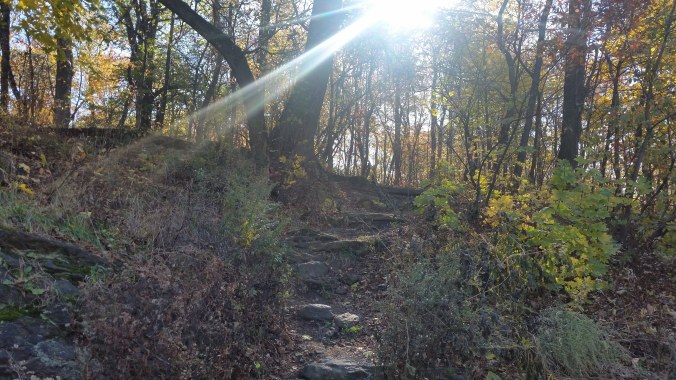 The North Woods, at Central Park

Beginning at our home in Harlem, we walked to Central Park, grabbing coffee from a favorite local coffee shop along the way. The North Woods are one of only a handful of fully forested areas in Central Park. In the summer, when the leaves are fully on the trees, all of the sights of the city are blocked out, and even most of the sound! The rustling of the wind through the crisp autumn leaves was an invigorating break from the rest of the world, fighting over its television sets, Macbooks, and designer clothing (no offense, of course, if that was you). The escape of the park, especially the North Woods, is an adventure each and every time we visit, a bloom of its own on the stalk of our life in the city!

So, we walked over 100 blocks on Black Friday. Not as many as we walk on July 4th, when we walk the length of the island (an odd but oddly fulfilling tradition of ours), but it was a wonderful escape. We found ourselves walking across the West Side and up Riverside Park on the way home, chatting about our life in the city and the direction we’re hoping for it to go. Really digging in to what roots us, and trying to find the ways in which we can blossom to our fullest.

Blooming where you’re planted means finding ways in which you can dig in and grow to your fullest potential, and it means… get out and explore!!!!!!! 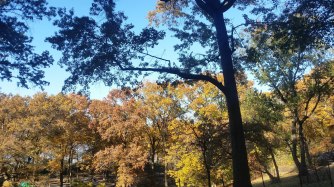 Did you know that Grant’s Tomb, the final resting place of Ulysses S. Grant, located next to Riverside Church, is the largest mausoleum in North America?

How do you bloom where you’re planted? What have you explored lately, or what exciting things have you discovered in your own backyard? I’d love to hear about your own adventures!

5 thoughts on “Bloom Where You’re Planted”