Whoever is alone now will remain so for a long time,
will stay up, read, write long letters,
and wander the avenues, up and down,
restlessly, while the leaves are blowing.

Well, we had a few days of warm-ish weather, but Autumn has certainly asserted herself once again as the dominant season in New York – lots of leaves blowing in the gusts of cold wind that come whipping up the street or through the park (not unlike the winds of Oklahoma, that come sweeping down the plain). 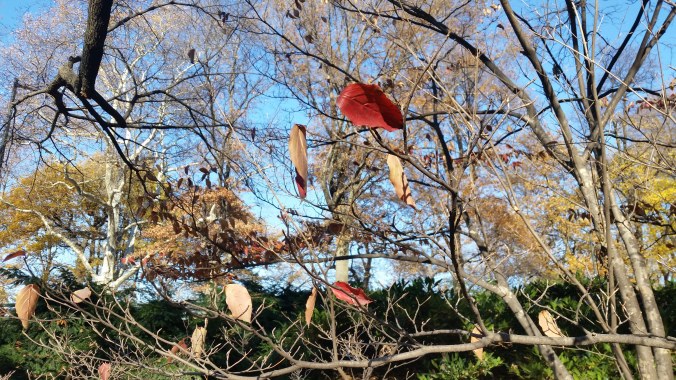 Something I notice a lot about myself this time of year is more introspection and unexpected meditation. I often wonder if going internally this time of year is my way of connecting with Nature’s cycle of settling into the ground to “think” about what is going to bloom in the coming Spring. Maybe we all are supposed to slow down around this time of year, to take stock of ourselves?

In Ayurveda, this time of the year (the cold, dry, rough & windy time) is related to the dosha known as Vata. Vata relates to the air element, and essentially involves all things dry, cold, and… well, full of air. In our bodies this can relate to anything from excess flatulence (Ayurveda is all about digestion) to spaciness and even, in its extreme forms, anxiety and nervousness.

There’s a saying in Ayurveda, that “like increases like,” meaning that anything that has dry, cold, rough, air-filled qualities of Vata will increase those qualities in our bodies, leading to excess and imbalance (more flatulence, more anxiety, more spaciness, etc)  But there are easy ways to assuage this quality in ourselves during Vata season.

Like I said in one of my first posts, Ayurveda is actually common sense.

Combatting these dry, cold, rough feelings is as easy as introducing their opposites, and we’ve known this all along!

Ayurveda is so much more than how the elements interact with our bodies and what we put into them. Ayurveda’s central concern is how our digestive system is working. In Ayurveda, the gut – and what we put into it – is the key to everything. Taking this “like increases like” idea to the gut, what better way to soothe the Vata in our bodies than with warm, viscous and nourishing foods? 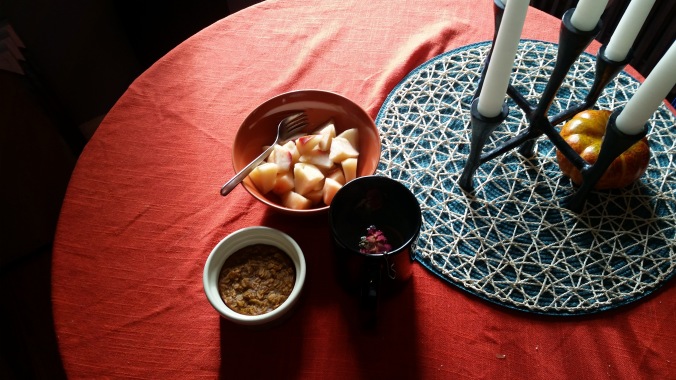 An Ayurveda-inspired Fall breakfast of stewed apples with ghee (recipe below), baked oatmeal, and Rose-Tulsi tea!

Below is one of my favorite morning meals, and it does wonders to pacify Vata (and Kapha, but that’s a later story). Morning is the best time to eat fruit, according to Ayurveda, and breakfast shouldn’t be skipped! This makes the perfect (and quick) light meal.

Vata-Pacifying* Stewed Apples (adapted from Maharishi Ayurveda’s and Hale Pule’s recipe)
*Vata best describes the cold, dry, and rough environment that is most familiar to us in the colder months of Autumn, and warm dishes such as this wonderful breakfast/dessert dish are incredibly good to combat it!

build an appetite for lunch, stimulate regular bowel movements, increase vitality and alertness, and provide a light but satisfying start to the day.

All in all, sounds great, right? Stewed apples (and cooking fruits in general) are much easier on the digestive system and release a lot of nutrients – and adding spices adds even more aide to your digestion.

As I mentioned in my first posts, “blooming where you’re planted” isn’t just about exploring where you are – it’s about taking care of yourself so that you can blossom to your fullest. I want to fill this blog with lots of juicy tidbits that I discover on my own path… thanks for joining me on the journey!

One thought on “Fall-yurveda in New York”