“What will this day be like?
I wonder…
What could that building be?”

Okay, so that’s not quite how the song goes in Rodger’s and Hammerstein’s Sound of Music, but walking along the Thames River (which isn’t far from our AirBnB stay), wrapped up in a quiet morning fog… and with so many beautiful buildings and fascinating architecture, the day held so much potential and wonder! And, of course, we had confidence!

Our morning of show tune references actually began with a chorus of “Dite Moi” from South Pacific (another R & H!), after seeing the all-too-familiar Pret a Manger chain restaurant as we crossed the Vauxhall bridge into Pimlico (and pestering my sister for the proper French pronunciation — it’s “pret-a-mahn-zhay”).

We walked along the Thames (“not Th-ames?” my sister asks, prompting a reflection on British pronunciation — it’s pronounced “Tems”), until we reached Westminster, stopping to admire the architecture of the Houses of Parliament and the Abbey. Lots of construction is going on around the clock tower, which houses Big Ben, and was almost completely shrouded in scaffolding. Apparently, this year began Big Ben’s 4 years of silence during renovation.

Sam and I took us on the walk we remembered from our trip here two years ago, passing the WWII memorials, the Whitehall Palace/Banqueting House, and Downing Street (no PM spottings, either visit), until wandering the streets around Trifalgar Square and St. Martin’s-on-the-green, settling for breakfast at Caffé Concerto, a chain where we’d eaten on our last visit, in a spot around the corner from Picadilly Circus. For those you fellow tourists, I just listed off a bunch of London highlights. We ate “full English breakfasts” (I’ve wondered if the Full English Breakfast was just a tourist-y thing, but it apparently has a longstanding tradition). We talked about our day and what we planned to do, and the only plans we had aside from eating, was to take an early tea at the Orangery at Kensington Palace.

We meandered through Picadilly Circus, and tried shopping at a mass souvenir shop – we didn’t stay long, as I think Sam and I have become extra self-conscious about appearing like tourists we see in NYC!

We wandered down to the Mall, in St. James’ Park, which leads to Buckingham Palace. Walking down the steps beneath the monument to the Duke of York, I was struck that this is the very spot Sam and I had discovered two years before, where I had actually sat while having my picture taken while on a field trip to London when I was in high school! It’s a shame I can’t find that original picture.

The tragedy that struck London during WWII was great. Many memorials are set up around the city (Dec 17, 2017)

The Monument to the Duke of York, off the Mall approaching Buckingham Palace (Dec 17, 2017)

Let it be known, that it is cold in London. It was hovering just a bit above freezing, and so we were stopping to get our hands on hot cups of tea every chance we got just to keep our hands warm while we walked. Walking through a park with a nice hot cuppa is also just a wonderful experience, in and of itself!

After dodging kamikaze pigeons (honestly, we all noticed, they were the fattest pigeons we’d ever seen!), we made our way back to the Mall and approached Buckingham Palace, just in time for the changing of the guard – it was quite crowded! 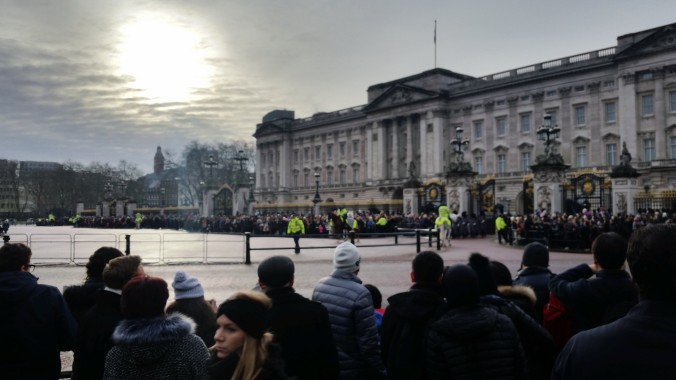 My sister later informed us why the guards were now dressed in grey, as opposed to the more commonly seen red tunics.

We ended up walking up through the Wellington Arch, into Hyde Park, where London’s “Winter Wonderland” is taking place – but honestly, it looks more like a state fair, and less appealing than we had imagined, so I think we’ll end up skipping it on our stay, here (and the lines to get in were astronomical!). 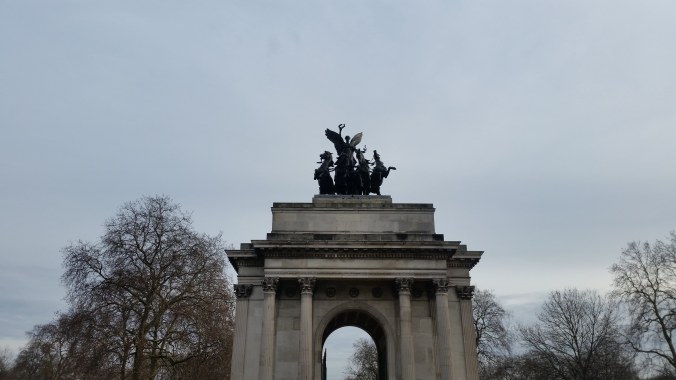 The Wellington Arch. Also known as a gathering place for tourists armed with cameras (Dec 17, 2017)

But we did see the Princess Diana Memorial Fountain, which we hadn’t seen before. A quiet spot, just off the water, the artist writes that the course of the water running in the circular fountain is supposed to be emblematic of Princess Diana’s life. Regardless of its symbolism, its quiet surroundings and serene beauty offered the perfect setting for quiet contemplation to the sound of bubbling brooks.

A portion of the Princess Diana Memorial Fountain (Dec 17, 2017)

Passing under a bridge, we arrived in Kensington Gardens, and made our way up to the Palace – no, we didn’t run into any of the royal family! But, it was starting to rain, so we hurried up to the Palace and set out immediately for the nearby Orangery, for our early tea (an hour and a half earlier than we’d planned, but I suspect we were walking faster due to the cold!)

We chose a “Royal Afternoon Tea” for £38.50/person, which included a personal pot of tea (we each tried something different), two towers of food with three pieces of everything (4 or 5 finger sandwiches, 2 kinds of scone, w/ clotted cream and jam), and a smaller assortment of sweets. It was impossible to get to the sweets, as we got so full with everything else! To top it off, we each received a glass of merlot rosé spumante!

I felt so hyped up already on the several cups of tea today, I felt positively jittery, and kept giggling.

It was just fun – Just to sit and take in the moment – just knowing where we were and what we were allowing ourselves to do, the way we all kept laughing at the slightest provocation, high on caffeine, sugar, alcohol, and the dizzying experience of sitting down and enjoying a piece of the city that we had planned to accomplish!

After tea, I kept saying, “but seriously… what do we do next?” as we hadn’t really planned out the rest of our day. We did spend some time in the shop in Kensington Palace (my sister bought a commemorative Princess Di plate), and then walked into the Kensington neighborhood and spent way too much time at a bookstore! Or, rather, we spent the perfect amount of time at a bookstore!

I bought two books, Dan Jones’ The Plantagenets, an absolutely riveting account of the Plantagenet line of Kings, from William the Conqueror to Richard II, and Trevor Royle’s Civil War: The Wars of the Three Kingdoms, that involves the events surrounding Oliver Cromwell… to whom I hate to admit that I am very distantly related. Yikes.

We stopped at a grocery on the way back to our AirBnB stay to get some light nibbles for the evening, so that we could retire early and dine “in,” and just relax after our first day. Getting used to jet lag is pretty intense, and they say it takes a day for every time zone you passed through, just to get on an even keel. So, we’ll all be okay by the end of the week?

For now, I’ll bring this entry – and this day – to a close. Sam is working on his needlepoint, and my sister is looking up information on the Palace and the changing of the guard (see her comment above on the grey dress of the guards). It’s nice to just be here, and relax.

Relaxing “at home” is, I feel, just as important as going out and experience some of the nightlife – and sometimes even more important. We often say “We need to spend ALL day and ALL night out and get the most out of this or that place,” forgetting that to get the most of our somewhere, we need to make sure we’re getting the most out of ourselves. How much to we enjoy whirlwind vacations, when we don’t give ourselves time to breathe and just be?

A wonderful, quiet end to the day, looking forward to the next. 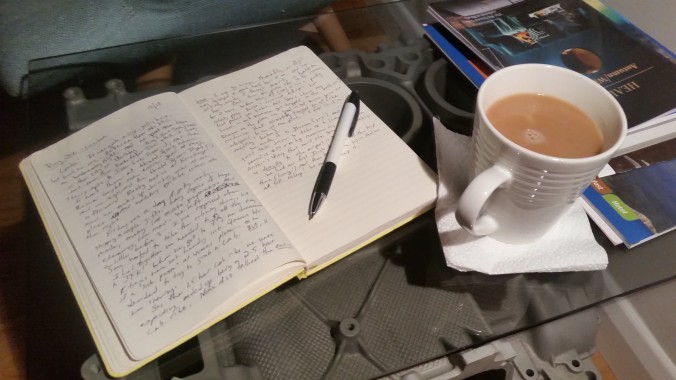